Home / Scenarios / In the Workplace 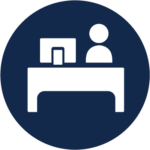 I am a long-time adjunct instructor. My course is being reviewed by the curriculum committee and I told the chair I wanted to attend the meeting to hear the discussion. He replied that those meetings are only for “big F” faculty members.

I am adopted and grieving the death of my mother. Over and over I’m told, by well-meaning people, “Oh, so that wasn’t your real mother who died?”

Several people in the office circulate emails with cartoons or jokes about the President. I don’t share their political views so I just delete them, but I feel like I am giving them a false impression that I agree.

I have worked in the business office for a long time. Every year a certain professor selects a student to be his protégé and uses his research account to take them to conferences and other meetings. I know he is manipulating them psychologically if not sexually to get them to do research for him. They get discarded eventually and some have come to me in tears. They don’t want to do anything because they fear backlash. When I went to the chair about it he refused to act without a formal complaint because this professor is “a star.”

There is a state law that no smoking is allowed within 100 feet of University buildings, but it is constantly violated by students, workers, and the public.

A senior coauthor on a manuscript took several weeks to do her portion of the edits for publication, and has made 100+ comments for me to address in 48 hours. I could have done it if I had received it when we agreed, but now I am in the middle of a time-sensitive project. Plus, some of the requests are unreasonable or unnecessary.

In our office, I’m the only female on a team of five. Although the leader has given us all equal jobs on a project, he keeps giving me additional tasks such as sending emails, scheduling meetings, and organizing our research. He’s even asked me to “beautify” our presentation. I’m grateful for my position on the team but on top of my role as a team member he’s also giving me more remedial tasks. I don’t want to say it’s about gender, but it seems unfair.